Food Bank Project: “My favourite thing was that I got to help people that needed it.” 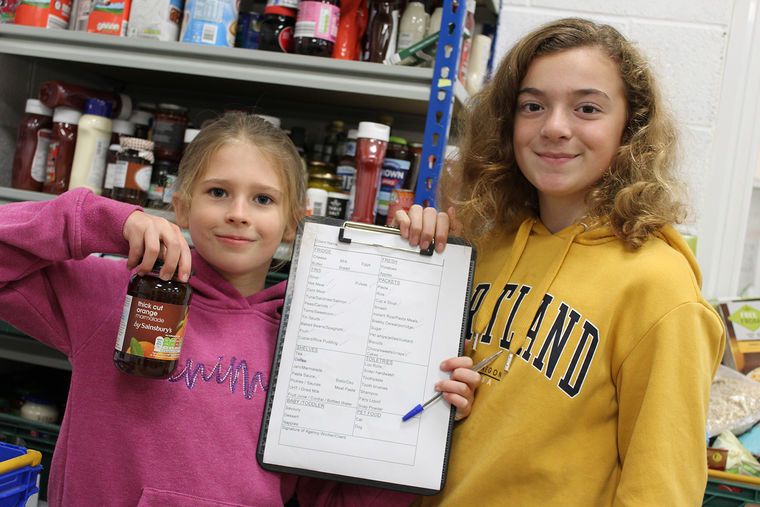 We read a lot in the educational press about developing character in our pupils. Generally, characteristics listed are along the lines of perseverance, resilience, a growth mindset and so on and so forth. All vital of course if our children are to grow into fulfilled adults.

Less is written about developing a virtuous character. At HCJS, we want our pupils to leave us having developed the capacity and desire to make a positive difference to those around them. In order to do this, we try to expose our children to experiences which will allow them to develop such characteristics.

Our work with Hereford Food Bank this term is a good example of a such a project. The initiative culminated in over 20 of our Year 5 & 6 pupils helping at the Food Bank during the October half term. The children gained a great deal from this – after all, it is difficult to beat first-hand experience.

In what follows, I explore how the children benefited from the project, using the children’s own words. 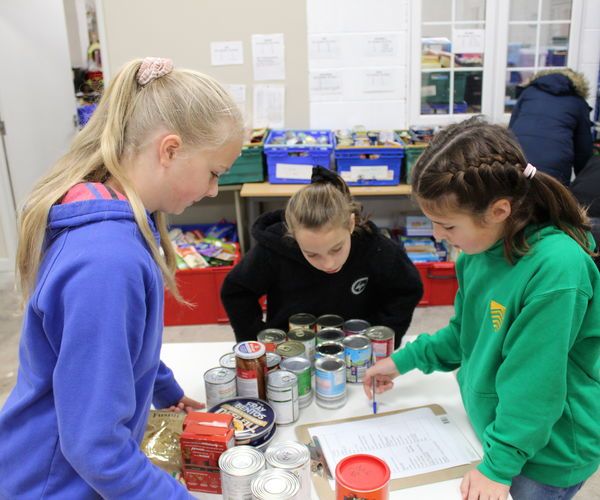 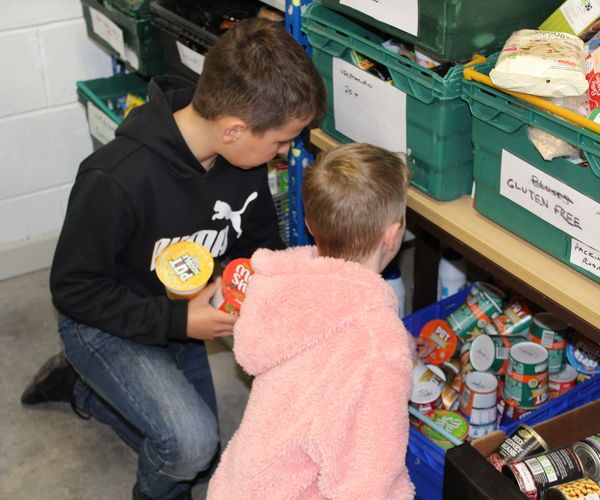 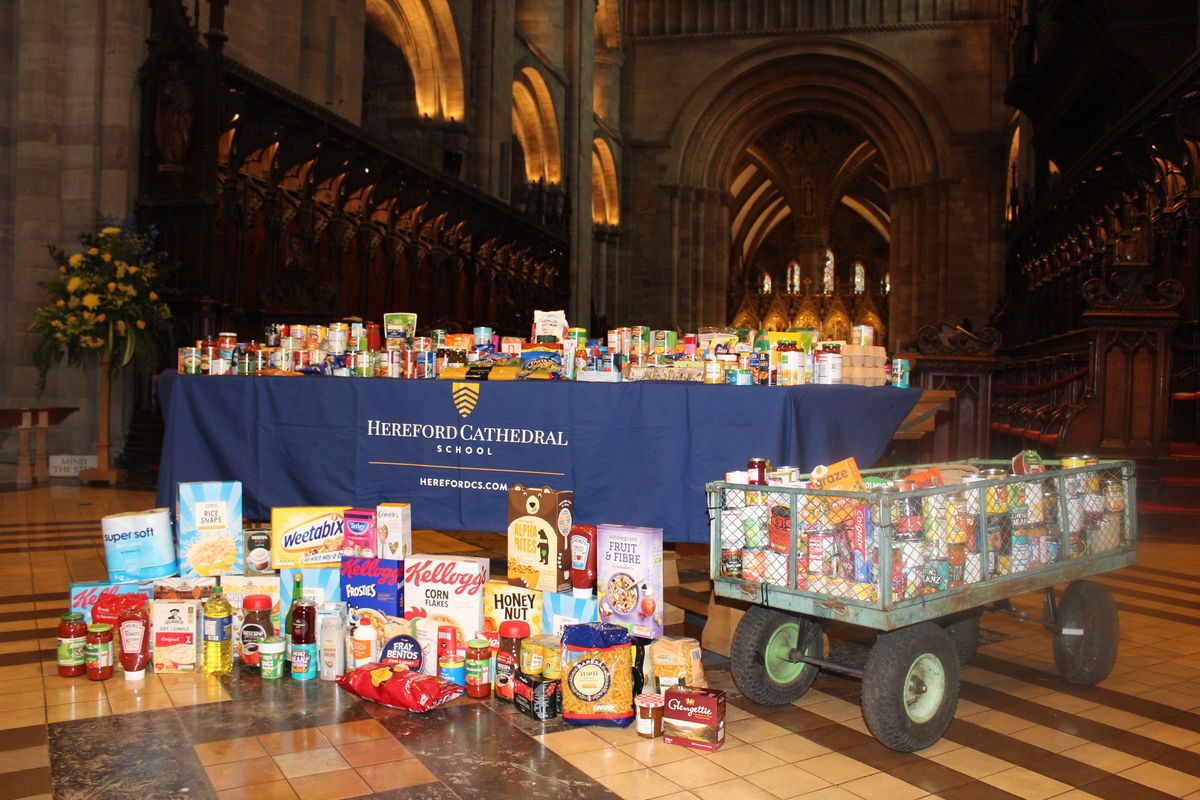 Learning about and working with the Hereford Food Bank has given our pupils the opportunity to:

“I’ve learned that we should be grateful for what we have and not take it for granted that we get all the stuff we need as not everyone else has it. And when you want something and your parents say you can’t have it you shouldn't get all stroppy and moan about it because some families wouldn't be able to buy any treats and nice things.“ Naiya (Year 6)

“It made me feel that we are lucky to be able to afford to buy food whenever we want and not to have to make it last until our next parcel from the food bank.” Emilia (Year 5) 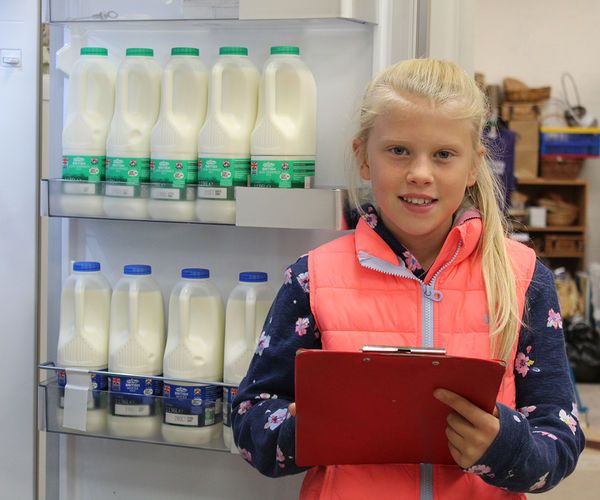 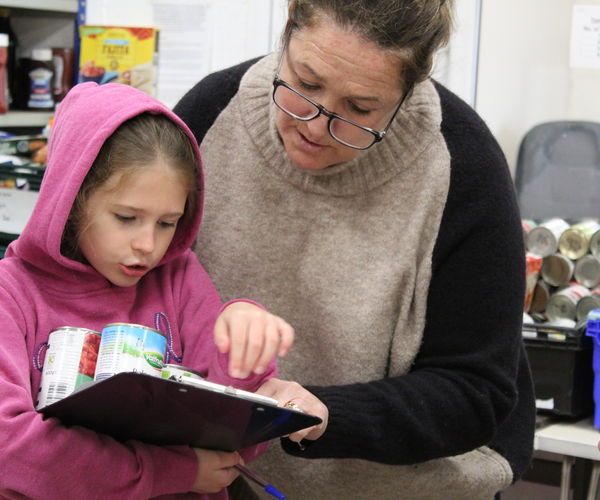 “The most powerful message for me is that The Food Bank are sending off packages to people who don’t have much and that makes me feel sad that they don’t have much but also grateful for what I have.” Maggie (Year 6)

“The biggest thing I learnt from this experience was not only the number of people relying on the food bank but the variety of backgrounds. I had thought the food bank would be used by homeless people and really only the poorest in society but I have come to realise that the people using the food bank come from all walks of life. It goes to show how fragile a “normal lifestyle” can be and how a small event or patch of bad luck can make the tables turn so quickly.” Aiden (Year 5)

“I also learn that different people need help from the food bank sometimes. The parcel that I was helping pick for was for a family of four that had been affected by the recent floods.” Theo (Year 6)

“Jackie said to us to think about what the people we were packing the bag for might like, especially as they can’t go shopping and choose what they want for themselves. It felt important that we did our best for them.” Sophie (Year 5)

“The thing I learned is not to tell anyone if a customer comes in because the person could get embarrassed if they know them. This is called keeping personal information confidential.” Humphrey (Year 5)

“A lot of the food in the parcel was in tins and there was only a little fresh food - it wouldn't be good just to eat this but I don't know whether they would also get more fresh food such as fruit and vegetables. The meat was mainly tinned or in pasta sauces so there was little cooking to do - perhaps they didn't have a cooker to cook with. I would not like to have to eat just this food but I don't know how much other food they can buy, nor what they spend any other money that they have on.” Emilia (Year 5)

“I learned that people come to the food bank for all different reasons: they can’t afford to buy food to look after their families or their local shop has been closed because of weather. One surprised me was one family came because all their kitchen unit (oven, sink, cupboards, fridge, freezer and food) had been destroyed because of the recent flooding in Hereford. The most important thing I learned was some people have to use the food bank because they can‘t pay for food in the shops.” Eirian (Year 6)

“We learnt how to make a food parcel and that you need to get things that the whole family might need e.g. think about the men and women in the family - shampoo and deodorant for example, need to be different for men and women.  If there are girls in the family you might need to give them specific items.”  Alex (Year 5)

“I didn’t realise I would have to help decide whole meals for the family and kept wondering what they would like. We also were told to think about how the family would cook the food, as they might not have enough pans or hob space, if we packed too many different things.” Perdita (Year 6) 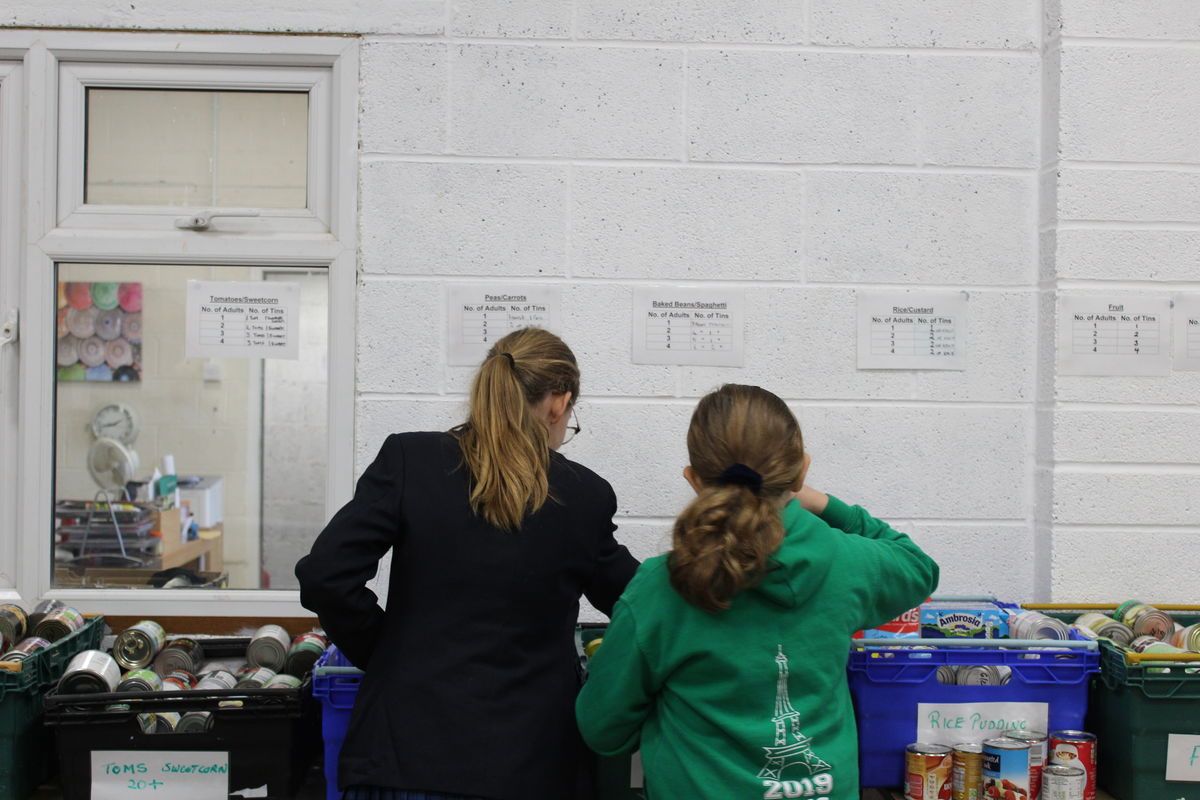 “I would recommend that others volunteer at the Food Bank as you are helping other people by being there when they need help and support.  I would love to volunteer there again if it is possible.” Alex (Year 5)

“I felt nice for helping…grown ups work there for no money, just to be kind….my favourite thing was that I got to help people that needed it.” Herbie (Year 5)

“I enjoyed the fact that I was helping people.” Freddie (Year 6)

“It was fun working at the food bank and it made me feel as though I had done a good deed. I would definitely do it again.” Isabel (Year 6)

“I liked the thought that I was helping other people who were having difficulties.” Perdita (Year 6)

“Working at the food bank made me feel sad. I thought about all the people that haven’t got enough money to buy food.” Gracie (Year 6)

“It made me feel sad that some children don’t get to go to the supermarket with their mum or dad and get to put things in the trolley like I do.”  Sophie (Year 5)

“I found it sad that people did not have enough money to afford enough food for their family.” Eloise (Year 6) 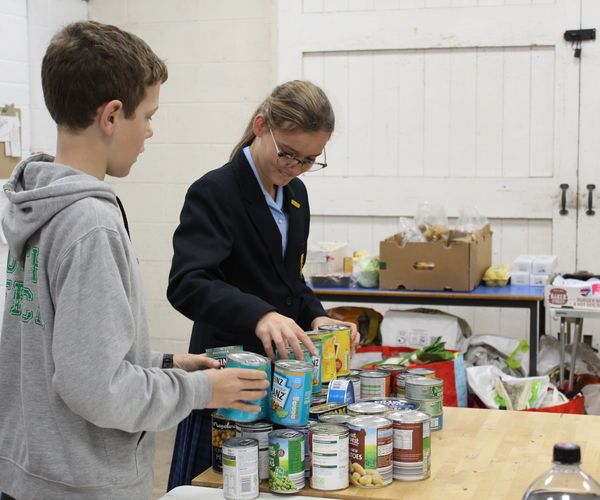 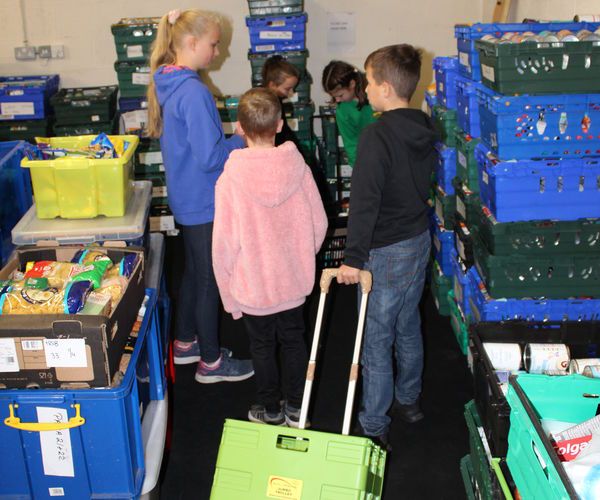 “Then we went to the food packing room where we were put in groups and had to pack a parcel according to what was needed on the clip board…we had a system where some wrote the dates and the others put them in the right boxes.” Naiya (Year 6)

“We were told a little about the families we were packing for and decided amongst ourselves what we thought they would need for the week.”  Alex (Year 5)

“We spent two minutes looking at the list, then we got to work." Humphrey (Year 5)

“I really enjoyed my chance to be the Leader and organise the team, ticking things off the list. I got much better at this after practice, as it was quite tricky keeping a check on the food being put on the table.” Perdita (Year 6)

“I presumed everyone had food like I do and didn’t realise that some don’t.” Isabel  (Year 6)

“I learned that without the food bank people would find it much harder to live.” Maddy  (Year 6) 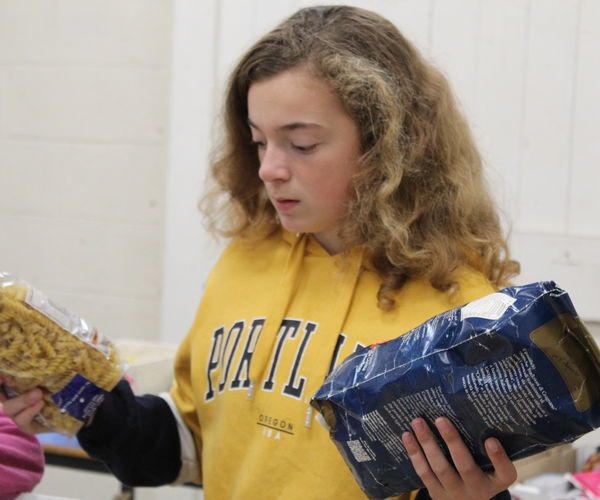 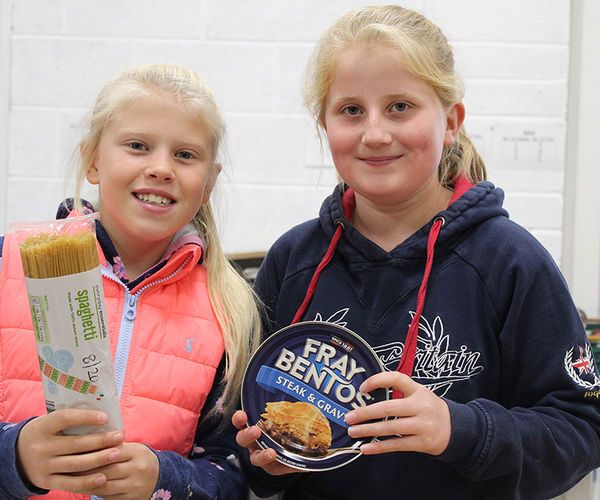 To finish, I would like to record my thanks to Jacquie Alsop, the Hereford Food Bank Manager, for hosting the children, and for giving them the opportunity to spend some time at the Food Bank. Clearly the children learnt a great deal. Thank you too to those members of staff who accompanied the children.

Of our children, Jacquie wrote:

“It was a pleasure to work with your pupils. They showed great empathy towards the families that they made up food parcels for. I was impressed with their "menu" choices and the explanation they gave was measured and thoroughly considered. The pupils worked well as a team and followed instruction without hesitation or argument. “

Whilst it is super to read such feedback, let’s be honest, we are none of us – adults or children – the finished article. No doubt we are all agreed on the importance of developing a virtuous character and making a positive difference to those around us. Sometimes I struggle to think of anything which may be of greater importance.

Head of the Junior School

You can read the children’s accounts for their food bank experience in full here: 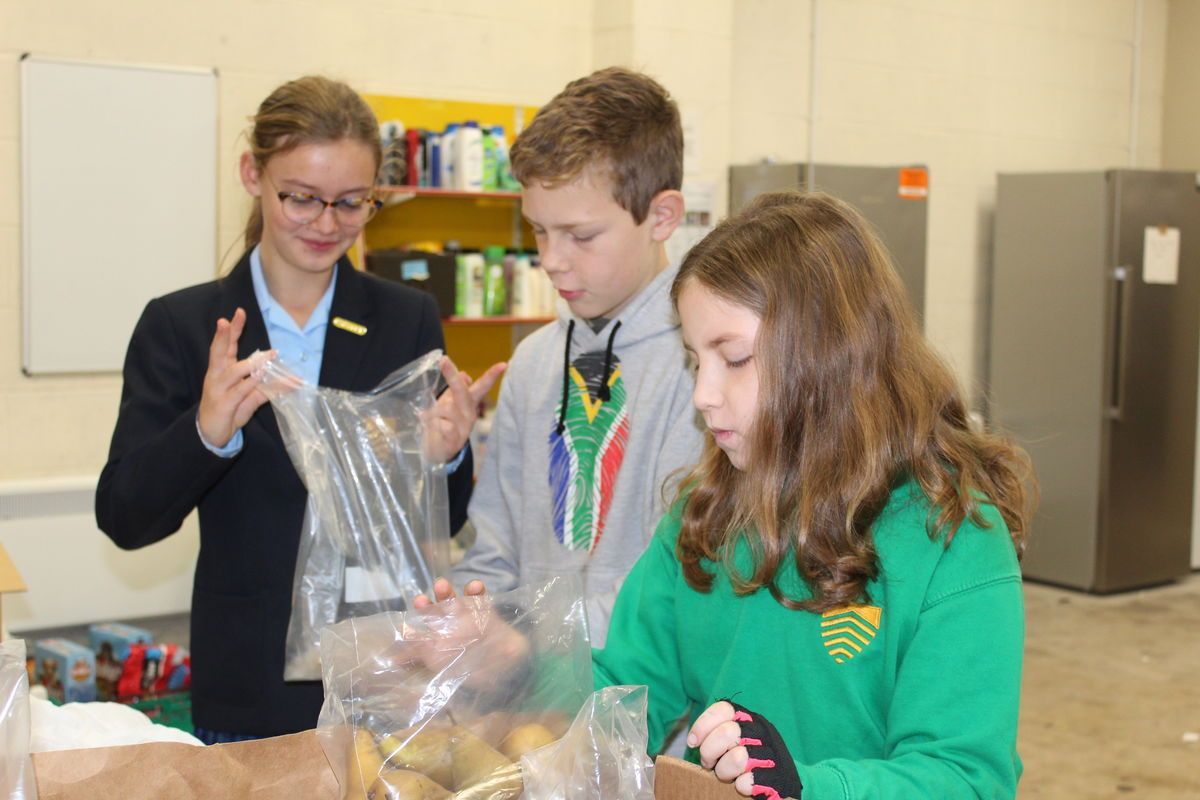