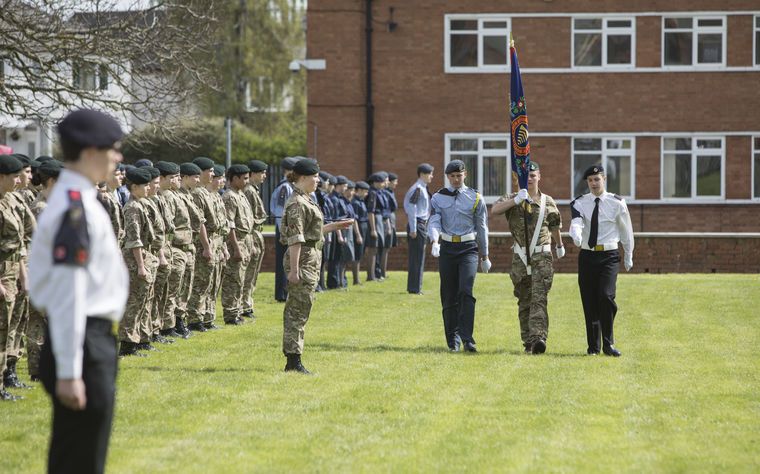 Bristol-based Brig Fraser, who is Naval Regional Commander for Wales & Western England (including the Channel Islands), came for a full day, including a morning of cadet parades and CCF activities including cadet citations, skills stands, weapons and field craft displays and a gun run finale.

After a visit to Hereford Cathedral to see the Weeping Windows poppies display and then to Hereford Museum to see Hereford Cathedral School’s 70 poppies, which it purchased to honour 70 former pupils who fell in the First World War, he was then brought to the Suvla Barracks on Harold Street to inspect 170 Army, Navy and RAF cadets who were on parade. 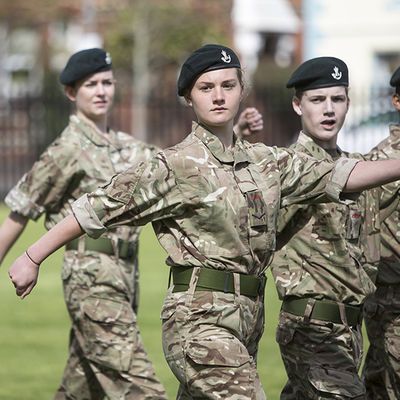 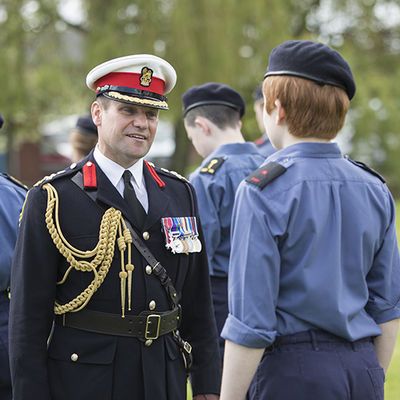 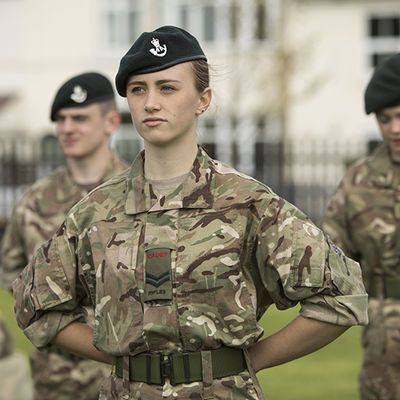 Commenting on how well the cadet forces from the two schools had integrated and worked as a team together, Brig Fraser said: “Being a cadet has given these young people so many different experiences, helping them to develop confidence, character and a natural authority in which they can
learn important life values.

“It was a real pleasure to be asked to inspect today and I was really struck by what a happy group of cadets they are, sharing their stories with me about their experiences – both Hereford Cathedral School and Whitecross School did so well today that I wouldn’t have known this was an integrated cadet force. Through fantastic adult volunteers they’ve also learned a combination of different values to help them in life, confidence, teamwork, leadership and general life lessons.”

Organiser of the CCF’s biennial inspection, Donna Greaves (Major Retd) and the first female SSI for Hereford Cathedral School, said: “On behalf of the Contingent Commander and CCF Staff I would like to thank you all for the huge amount of support you have provided to the planning, preparation and coordination of the Biennial Inspection. The weather was kind and the feedback from the Inspecting Officer and guests has been very positive. In addition, it was a pleasure to have the Year 8 students and their teachers with us for the afternoon.”

Headmaster Paul Smith said he was proud of the cadets’ “conduct and the core values of duty to others” that they’ve learned through their time in the CCF. VIPs in attendance with Brigadier Fraser were Captain Hunter-Choat, Tim Knapp who is Headmaster at Whitecross School, and Bob Tabor DL.

Mr Knapp, Headmaster of Whitecross School said: "It was a great honour to attend the recent biennial inspection of the Combined Cadet Force. Since 2013, Whitecross has had a contingent of cadets training as part of the Hereford Cathedral School CCF and this year we have over 30 taking part. I was especially proud to be present to see Whitecross student, Macauley D, receive the award for cadet of the year.

"This partnership, one of very few such arrangements nationally, is going from strength to strength and I could not have been prouder of all the young men and women of Herefordshire parading at the inspection and representing themselves, their families and their schools with such dignity and honour. I have to thank all the staff of both HCS and Whitecross who have worked so hard together to make the partnership such a success."

More photos from the Biennial Inspection can be viewed on the Hereford Cathedral school Facebook page.