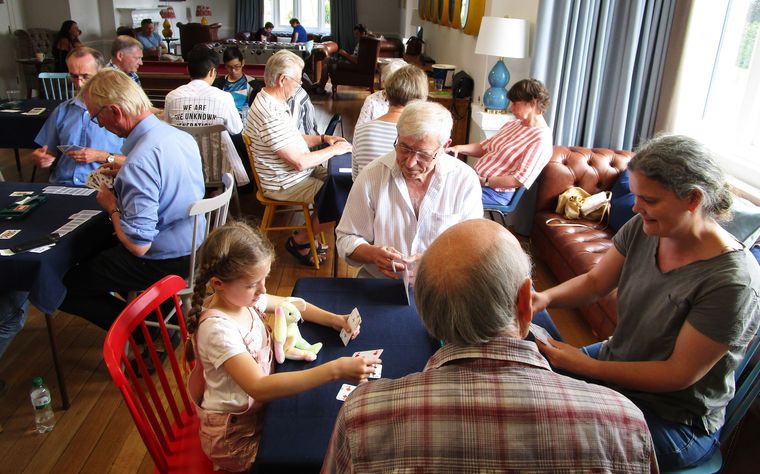 Hereford Cathedral School pupils and St Paul’s Primary School pupils, along with members of the public, members of Herefordshire bridge clubs and the Herefordshire County team came together on Sunday 30 June to play a Minibridge Duplicate Tournament, with all proceeds going to St Michael’s Hospice.

The tournament was organised by Assistant Director of Studies Mr Croot and his wife, Assistant Head of St Paul’s Primary School and Reception Teacher.

Mr Croot, whose after-school bridge club is popular with both UK and international students at the school, is keen to get younger generations involved in the game. His wife learnt bridge from watching her husband and now passes on the sociable skill to Year 2 and 3 at St Paul’s in the form of minibridge, which they think is great fun.

Players at the tournament ranged in abilities and ages, with different family generations playing together, blowing the misconception that bridge is for the older generation simply off the bridge and into the water. Mr Croot said, “Bridge has all the technical elements of chess but is more sociable and builds camaraderie between players.”

Minibridge is a simplified version of bridge, perfect for beginners, with no bidding, and it is an interesting game in its own right. Not dissimilar to speed dating, the game is played in 15 minute rounds, with two hands and two pairs, with one pair moving on to the next table at the end of each round.

“There is no room for relying on the luck of getting good cards,” said Mr Croot, as in duplicate bridge, hands are passed around the room and scores are calculated by comparing players who have held the same cards. The best players have strong analytical skills and a very good poker face. One St Paul’s pupil even brought her toy bunny for support.

The tournament took place at Wilmot House, How Caple, following its recent transformation into our new boarding house. Mr Croot chose the venue for “its character, homely nature and for its wonderful catering facilities.”

The day was a great success, raising £445 for St Michael’s Hospice. Mr and Mrs Croot plan to host another tournament next year; all are welcome.