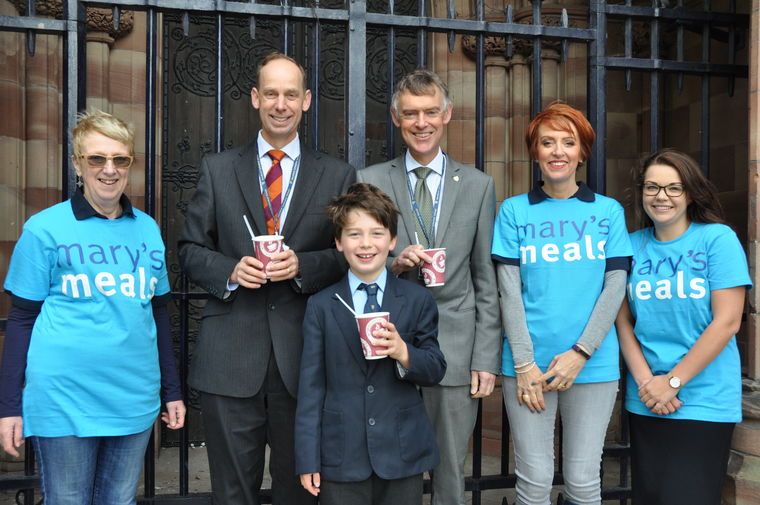 World Porridge Day came to Hereford this week when the amazing global charity Mary’s Meals set up a porridge stall in Cathedral Close.

Every day, Mary’s Meals feeds 1.23million children in the poorest parts of the world with a nutritious meal while they attend school.

Mr Wright, Headmaster of Hereford Cathedral Junior School, is an official speaker for Mary’s Meals and says: “Mary’s Meals appeals so much to me because it gets children into school when they otherwise wouldn’t be. A nutritious meal eaten while they’re at school also means young children are able to work harder.”

Mr Wright speaks at school and college events and recently spoke to students at Hereford and Ludlow College to promote this week’s Porridge Day. Mary’s Meals sold cups of porridge on their stall for £2 each to raise much-needed funds. Describing itself as a ‘no-frills’ charity, Mary’s Meals directs 93p in each £1 directly into its charitable activities to save young lives around the world.

After the successful event in the grounds of Hereford Cathedral, a spokesman for Mary’s Meals said: “Thank you Hereford! Our Porridge Day was a huge success – to all those who donated, helped, served and spread the word about our Porridge Day – thank you, thank you! And most of all – to those who braved a chilly wind for a cup of porridge to help Mary’s Meals - thank you!

To feed a school child for a year, it costs just £13.90 per year – Mary’s Meals says this amounts to two lattes and a cinema ticket! To find out more about donating please visit their website.