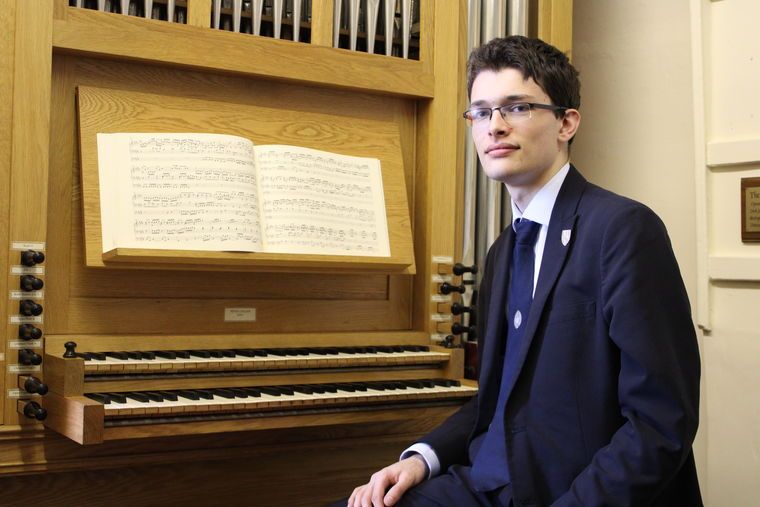 Hereford Cathedral School pupil and burgeoning organist Michael D’Avanzo has received an Associateship Diploma from the Royal College of Organists, an impressive achievement for someone aged just 17.

The Year 13 pupil and former Hereford Cathedral chorister describes the organ as his “passion”, and has studied the instrument under the guidance of Hereford Cathedral organist and director of music, Mr Geraint Bowen, for four years.

The demanding ARCO involves a practical exam and two three-hour written papers assessing harmonisation, fugue writing and counterpoint. For the practical exam, Michael had to play three pieces and tackle keyboard skills tests, assessing transposition, sightreading, score reading and harmonisation. In preparation for the ARCO, Michael stepped up his daily practice regime, making sure he undertook sample keyboard tests for at least an hour every day.

Commenting on Michael’s ARCO diploma achievement, HCS Director of Music Mr David Evans said: “What an achievement for anyone, nevermind a 17-year-old student! Michael is a very focused and capable individual who lives for his music. Most importantly, though, he is a very modest young man and an extremely capable musician.”

His organ teacher, Hereford Cathedral’s Director of Music, Geraint Bowen, said: “Michael joined Hereford Cathedral Choir at the age of seven and was an outstanding chorister. During his six years in the choir he took part in CD recordings, BBC broadcasts and tours of South Africa and the USA and several Three Choirs Festivals. He started learning the organ as soon as he left the choir in 2015 and to have gained his ARCO in the lower sixth is an outstanding achievement.”

Michael had his first taste of the organ as a young boy, after taking up the piano. He explained: “When I started learning the piano I lived in London and my piano teacher was the church organist. He let me come in and play the organ in the church and I just absolutely loved it. It’s a fantastic instrument.”

After lessons, he spends an hour each day practising on the school organ, which the HCS Music School purchased last year. At home, he plays a digital organ.

As the current organ scholar at Holy Trinity Church in Hereford, Michael says most of the playing he does is at church. He has played organ recitals to packed audiences in Hereford Cathedral, Dore Abbey, and most recently at Woolhope Parish Church, where turning the pages for Michael was his sister Isabel, who is also a music scholar at HCS, and a member of the School’s acclaimed Cantabile Girls’ Choir.

Michael has also achieved Grade 8 on piano and hopes to gain his piano ATCL in the next few months. He is a member of the HCS Senior Chamber Choir and Chapel Choir.

He was one of the School’s top-performing scholars at GCSE in 2018 and will be taking his A-Levels in music, physics and further maths next summer. Michael is currently making applications to various cathedrals for organ scholarships for a gap year. Beyond this, he hopes to study music at university.