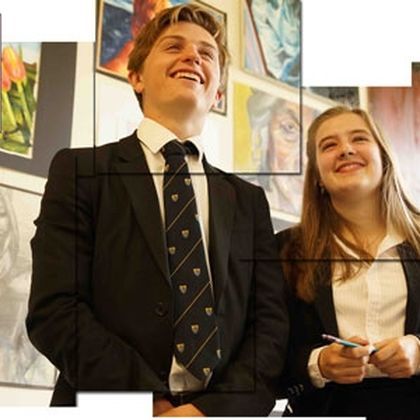 Justifiably growing more self-assured, a school with a great deal to offer and an ethos of careful, thoughtful, nurture. Much to impress, with truly outstanding arts and music, a wide curriculum, a great sense of community service and genuine commitment to developing courage, confidence and a sense of adventure in even the quietest child.

Strong academically, with 48 per cent A*/A and 76 per cent A*-B at A level in 2014 and 59 per cent A*/A at GCSE. At A level, English, modern languages, history, art, music and RS all do very well. Good results in sciences too - no really weak areas. Nice range of A levels - the usual suspects plus Latin, history of art, philosophy and ethics.

As well as receiving half termly grade reports for effort and achievement, with target grades included from year 10, pupils have to fill in a self assessment form every term that is completed alongside their reports - something parents value highly. Staff say this is not a crammer and that the range of abilities is reasonably wide. Nonetheless, expectations are high.

All students take maths (top sets take two AS modules in year 11), two English, and short course RS as compulsory GCSEs. Some 60 per cent take triple award science and the remainder dual award. The vast majority take French or Spanish, although a handful use the curriculum time for learning support. An additional three subjects are chosen from a range of options, GCSE Japanese is offered as an extracurricular addition, and the school is about to introduce Mandarin.

Interactive white boards in most classrooms, school email used to set and receive work - although traditional means are also used, and there is good access to PCs within school for those who wish to use them, including a dedicated area in the sixth form centre. A well-stocked library with its own small IT suite and a galleried, silent study area. Welcoming and evidently well used, also the venue for the school’s book clubs, debating club and film club.

Learning support is well organized with all children MIDYIS tested on entry and supported as necessary, either within class or small group withdrawal. A sense of 'open door' for any wanting assistance. Pupils say they can go into the learning support unit for 'anything and everything'. A handful of international students in the sixth form, all of whom are tested on entry, have EAL timetabled into their week.

Art, music and design are simply outstanding here. The A level results speak for themselves, and the quality of work on display is excellent, varied and innovative. Complemented by a small but very well-resourced history of art department. Beautiful, naturally lit studio for the use of sixth formers and large light rooms for the lower years. Textile work is also beautiful.

At the other end of the design spectrum, the DT workshops (for both resistant materials and electronics) are well kitted out with and well organized. Some interesting project work, and DT seems to have been fairly successfully sold to the girls, who make up around 25 per cent of the GCSE cohort.

Music is a central part of school life. The school remains the choristers’ school for the cathedral but aside from that there are masses of choirs, chamber ensembles, jazz bands and piano trios as well as a music technology club. About half of all pupils take instrumental lessons, and the school is a choral power to be reckoned with. The senior girls' choir (Cantabile) has won the senior children's choir section of the Llangollen International Musical Eisteddfod.

Sporting success is seen as important but participation is also perceived as a means of increasing pupils’ confidence and strengthening relationships. Successful teams fielded in rugby (two Welsh U18 players in recent years), cricket (a number of county players – the girls’ cricket team have played at Lords several times in the last few years, reaching the finals of Lady Taverners indoor cricket competition), hockey (boys and girls - county and regional players), netball, rounders (two England players) and tennis. Football has also now been introduced for boys and rowing is popular too. Large and well-equipped sports hall. Fencing and swimming also available as options. Spacious, well-maintained sports fields are a 15 minute walk from the cathedral green (slight moan from pupils who have to walk there and back); netball courts are close, though not actually on site.

Unusually, CCF is compulsory in year 10, and many stay with it into the sixth form. It runs a huge range of courses including leadership, sailing, gliding and diving. There is a regimental dinner, summer camps, annual field days. The school also runs an annual trek for year 12 students to the Annapurna range in Nepal where it supports a local school. D of E also well supported.

Extracurricular clubs in just about everything - including mycology, Japanese, New Testament Greek and (reassuringly) board games. Definitely a school where all interests are catered for.

Herefordshire is a deeply rural county, and Hereford itself has something of the quiet county town about it. It is impossible not to feel slightly removed from the cut and thrust of the 21st century here. The school, originally for choristers of the 12th century, is set around the stunning cathedral green, and the splendours of the cathedral lend a special flavour to the place. That connection (the chaplain is a minor canon of the cathedral, as well as teaching full time) gives the school an implicitly Christian flavour and pupils clearly appreciate the depth and beauty of the place.

Quite traditional in feel. Monitors (prefects) wear gowns to chapel, as do academic staff. Services are held four times a week in the nave, and much of the musical and artistic excellence of the school seems to feed off the cathedral tradition of creative and artistic expression. Good spaces between the buildings, which are a combination of listed glories and more modern blocks (such as the sports and dining halls). But for all the leafy tranquility, the school is a very busy place, with lots to do, lots going on, and great enthusiasm from top to bottom about the possibilities 'out there'. One of very few schools whose pupils can claim to have founded a charity with a national ambit (The Little Princess Trust). And there is another under construction. Pupils evidently feel that not only do they have a responsibility to do the right thing, but also that they have the capacity to make a difference.

A very pervasive family atmosphere - the school runs from 3 - 18, so lots of siblings, many parents are Old Herefordians, and many staff educate their children here, so the community is remarkably tight.

Pastoral care is evidently a very integrated part of school life - four school houses, each with eight tutors, so tutor groups are small. Academic staff are positively encouraged to run extracurricular activities and to strengthen relationships and pastoral links through them. Parents are encouraged to email academic and house staff with any queries, and say that any concerns are dealt with 'instantly', and 'children are kept too busy to have time for cyber bullying'.

Pupils say there is no problem with reporting bullying and getting it sorted out if it arises, but that it is rare. They also say that the school system of detentions is applied consistently, but that need of it is infrequent. Staff say they have very little to deal with on the disciplinary front.

Pupils are an absolute delight - very supportive of one another, articulate and appreciative. Comfortable in their own skin, but not full of themselves. Extremely positive about the school and proud of their achievements, but no trace of entitlement or arrogance - if they are a little on the quiet side one gets the impression that this is a result of not having to shout in order to be heard. Parents are a combination of local farmers, businesspeople and professionals. Many attended the school themselves. Busy, supportive PTA. Parents say, 'All children have something special - and here the teachers help them find it', 'The school builds self confidence' and 'identifies needs quickly', both academically and pastorally.

Selective, but with Herefordshire school numbers in a demographic dip, cannot afford to be hugely so. Most of the junior school pupils end up here, and unless there is a particular cause for uncertainty, are offered a place without taking the entrance tests. All external candidates at 11 examined in English, maths and VR. There is also an interview for every candidate. Successful candidates at 11 can defer their place to 13+ if happy in a prep school elsewhere, and there is also a separate entry procedure at 13 (not CE). For the sixth form at least six Bs at GCSE and at least Cs in English and Maths GCSE are required plus references, interviews etc.

The majority stay past GCSE and into the sixth form though a few go to the local, and very well thought of, sixth form college. Four to Oxbridge in 2013 (from an upper sixth of around 65) plus lots to Russell Group - especially Bristol, Cardiff, Leeds, KCL. A good mix of subjects - including dentistry, physics, veterinary science, law, history, business and economics. A number too taking fine art and music. Not many into electronics or ICT.