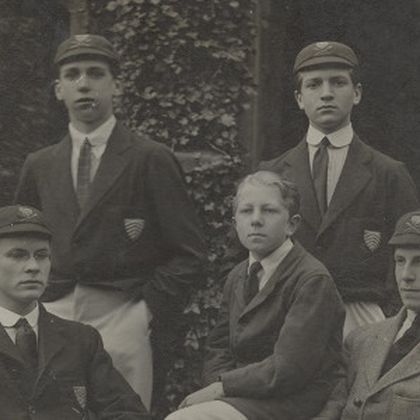 Every young person leaving HCS walks through the Cathedral Close and out into the world of the unknown and this was never truer than one hundred years ago. Then HCS was a small school of around 70 pupils, then, so many former pupils answered “the call”. Their names were listed in the Hereford Times weekly, together with boys from all over the County. In 1914 practically all senior boys left HCS in order to join up or go into training and by Sept 1915 so many former pupils had answered “the call” that there was not a single boy of 17 who could pass a medical left in the school.

Their dorms became dug outs, scrum on the rugger field would soon be a scrum to capture an enemy objective. The names learnt in a history lesson on Waterloo, then 100 years old, would soon be places they too had visited and defended. They were transformed from schoolboys to soldiers within a few months.

In our archives, The Herefordian magazines of the time recorded not only school life, but published lists of former pupils known to be serving, details of honours awarded and of those killed. It documents debates, extra holidays given to recognise honours awarded, visits from serving OH and the thoughts of the Head at each successive Speech Day. Through it we can see the change in the School’s psyche, echoing the national mood, as the war progressed.

Sadly, former pupils of public schools were often, by virtue of their family background and schooling, healthier and fitter than their contemporaries. The public school system, with its Officer Training Corp and sports, taught team working and leadership and many families already had a long tradition of serving in the armed forces. Thus, former pupils were ideally suited to the role of junior officer. As such they ‘first over the top’ and at the height of the war on the Western Front, this meant an average life expectancy of just six weeks.

For HCS, the toll on former pupils was horrendous. In this “War to end all wars” over 400 HCS boys were known to have served, 4 times the size of the school in 1914. Many were wounded, mentioned in dispatches and awarded medals. Tragically, 70 of that number were killed. It was truly the loss of a generation. OHs served in every branch of the forces and in every arena of the war.

Over the next four years we will remember those former pupils and staff who served and those who died 100 years ago. The School will continue to hold its annual service of remembrance, and evening of words and music for remembrance. In addition, we will use the OH archives to add colour and character to the names of those who fell from the details in the OH magazines and photographs of the time so that this generation of HCS pupils find a connection with those young men.

We have marked this significant anniversary, starting with the dedication of a plaque of remembrance in St George’s Memorial Chapel Ypres, kindly paid for by the OH Club and Mr Ege Parker and with the planting of a new tree outside No1 Castle Street dedicated to the Fallen.