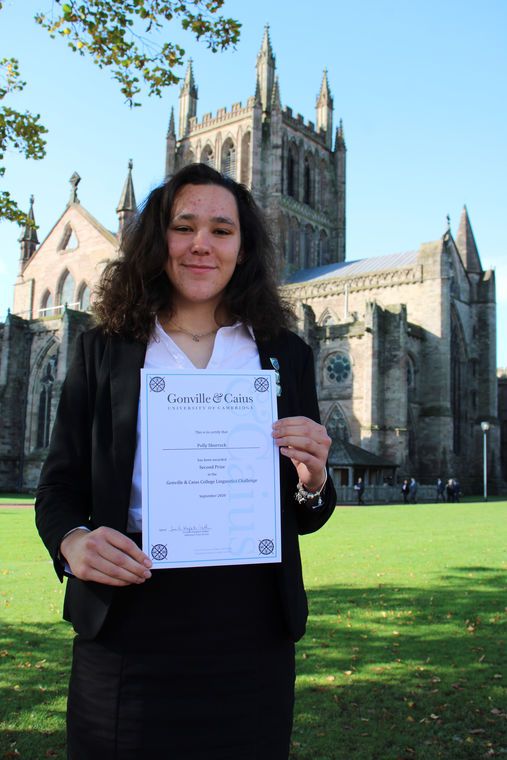 Hereford Cathedral School Sixth Former and classics enthusiast Polly S certainly made the most of her time during lockdown. During the summer, she gained high praise for scooping prizes in two classics essay-writing competitions organised by Oxford and Cambridge colleges. Now she has been awarded prizes in no fewer than six further competitions, winning cash prizes for both herself and the School.

The 17 year old was awarded £400 as the overall winner in the Newnham College Classics Essay Competition, the title of which was: ‘“We know both a lot more and a lot less about Pompeii than we think” (Mary Beard). Could the same be said about Troy?’ She also won first prize of £150 in the Girton College Humanities Writing Competition, whose judges deemed her entry to be: "Clever, teeming with ideas, well argued, clearly structured, with impressive secondary readings.”

Polly also came second in the Gonville and Caius Linguistics Challenge and was commended in four further competitions arranged by Trinity College Cambridge, St John’s College Oxford, St Hugh’s College Oxford and Peterhouse Cambridge, which saw her tackle ideas such as ‘Ancient Greek historians are more interested in telling a good story than in telling the truth. Discuss.’ and ‘Can one write a history of women in Ancient Greece?’

Polly said that it had always been her plan to enter these essay-writing competitions, but lockdown gave her the perfect opportunity to get lots of reading done in preparation.

HCS Head of Classics Miss Jodie Mallett said: “Polly's achievements have been outstandingly impressive; she has excelled not only in the field of Classics, but in History and Linguistics, too, showing the breadth of her knowledge and interest. The quality of her writing far exceeds the level of most undergraduate essays, and her passion for her subject is palpable in all of her work. This string of accolades augurs very well indeed; I am sure we will see Polly go on to achieve even greater things in the future.”

Lockdown also provided an opportunity for Polly to pursue other classical endeavours for personal amusement. She explained: “I translated Book One of Horaces’s Odes. We did [A Book of] Satires as one of our set texts for Latin, so I decided to translate more of it for myself.”

Year 13 pupil is now hoping to apply to Trinity College, Cambridge, to study Classics next year. As a keen member of Hereford Cathedral School Boat Club, Polly hopes to continue her rowing alongside her university studies.

Headmaster, Mr Paul Smith commented: “Polly's achievement, outstanding by any criteria, is hugely impressive to me. Her excellent performance in these challenging competitions not only illustrates her determination and expertise but also a maturity beyond her years. I heartedly commend Polly, not just for winning these prizes, but for having discovered a real joy in learning. She is clearly developing into an accomplished scholar, and I have no doubt that she will continue to do well in her academic pursuits. We shall watch her progress with admiration and interest.”